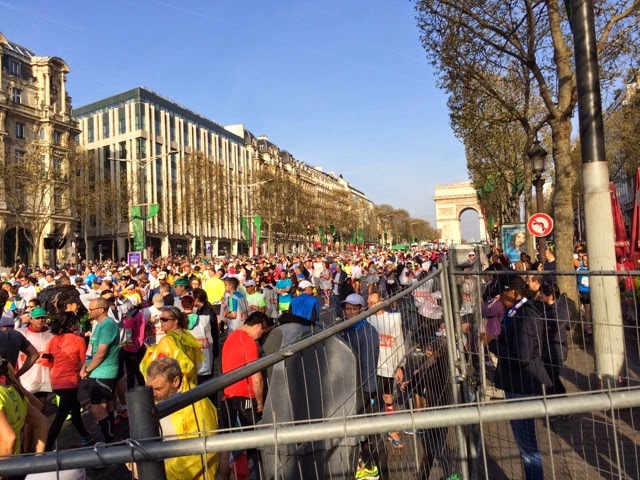 April 12, 2015 will live forever in our minds and the feet of one. The hubster ran and finished his last marathon, ever. And I finally made into the Paris Opera House.  Hubster unfortunately didn’t.  Don’t tell him we went.  We promised we wouldn’t look up at the glory of the ceiling.
The race for the hubster started at 10:05 on the Champs de Elysee under the shadow of the Arc de Triomphe. What a great sunny day for running it was turning out to be.
We left the chaos of the starting line, marathon map in hand and a plan to meet up and cheer on the hubster at certain points along the race. 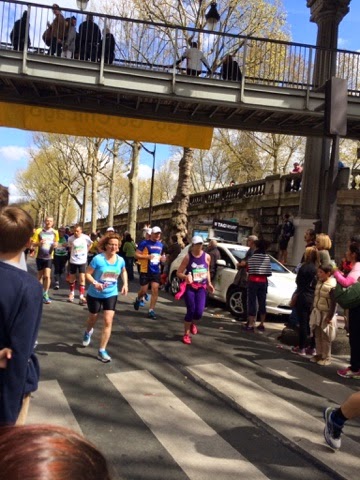 Our goal was to meet up at 3 check points. We missed him at the first check point only because we were enjoying the beautiful interior of the Opera House, don’t tell. I had come to see the Chagall ceiling and was not disappointed. The Opera House was built in 1861, Grand Staircase, the Grand Foyer and of course the ceiling. That beautiful ceiling I could stare at it all day. It depicts scenes from operas by 14 composers. Installed in 1964 was of course controversial. I think it’s a masterpiece.
Now back to the race. We met up a the 30 km and I gave him a big hug and helped him over the 30 km marker. So now I can say I crossed the 30km marker in a marathon! We helds up signs and cheered on the racers that looked like they needed much encouragement. 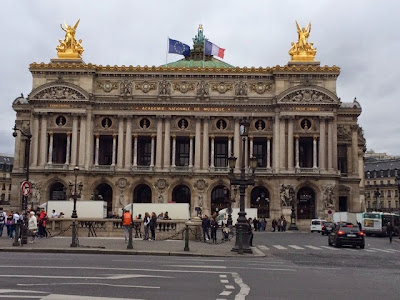 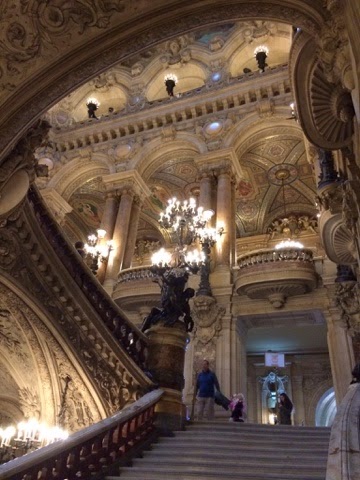 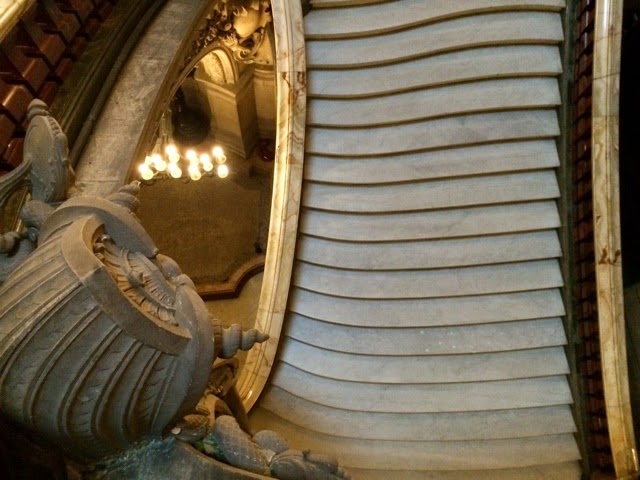 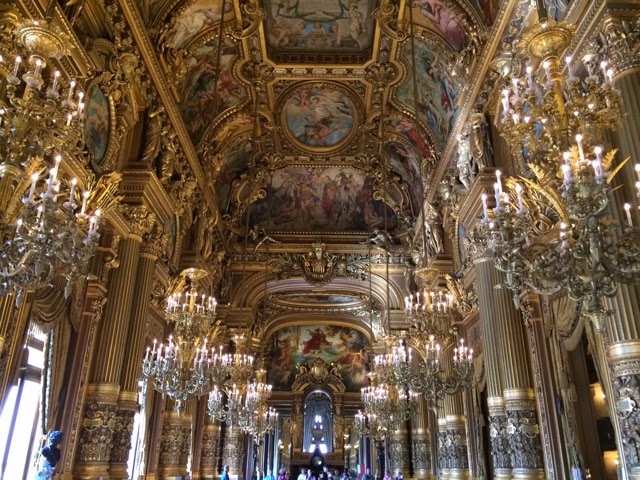 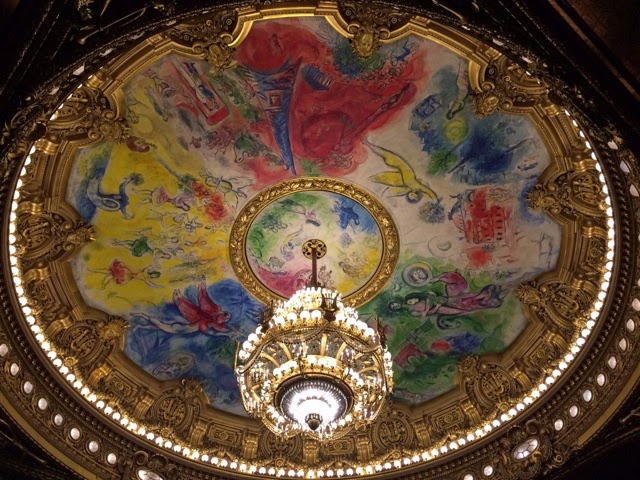 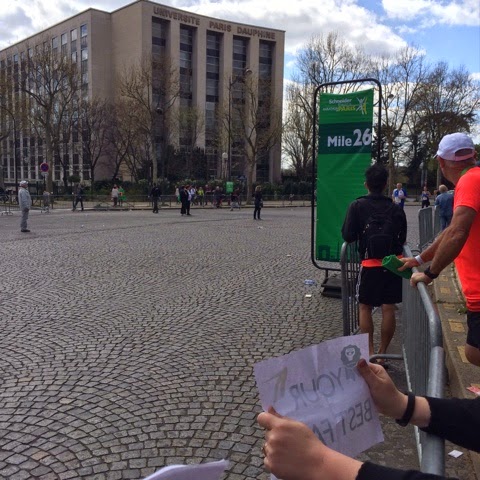 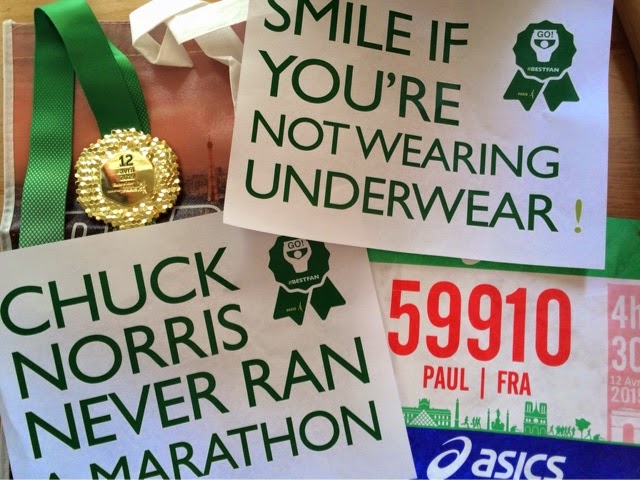 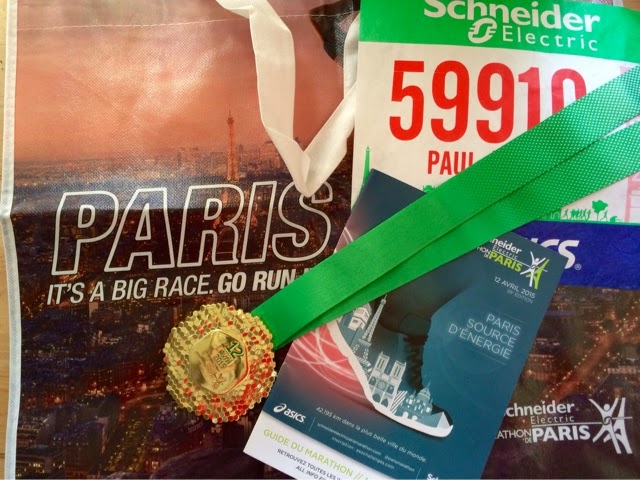 We raced onto the next check point, the 26 mile marker. Again we cheered those racers that needed an extra ump!  Some runners remembered us from the earlier checkpoints! They kept smiling and some even said Chuck Norris was going to kick my ass. Only .2 miles to go and the hubster pushed on to the finish! Who says you need to train to run a marathon! Well for the very last marathon for the hubster it was a true test of determination but for us it was a great day of sights!