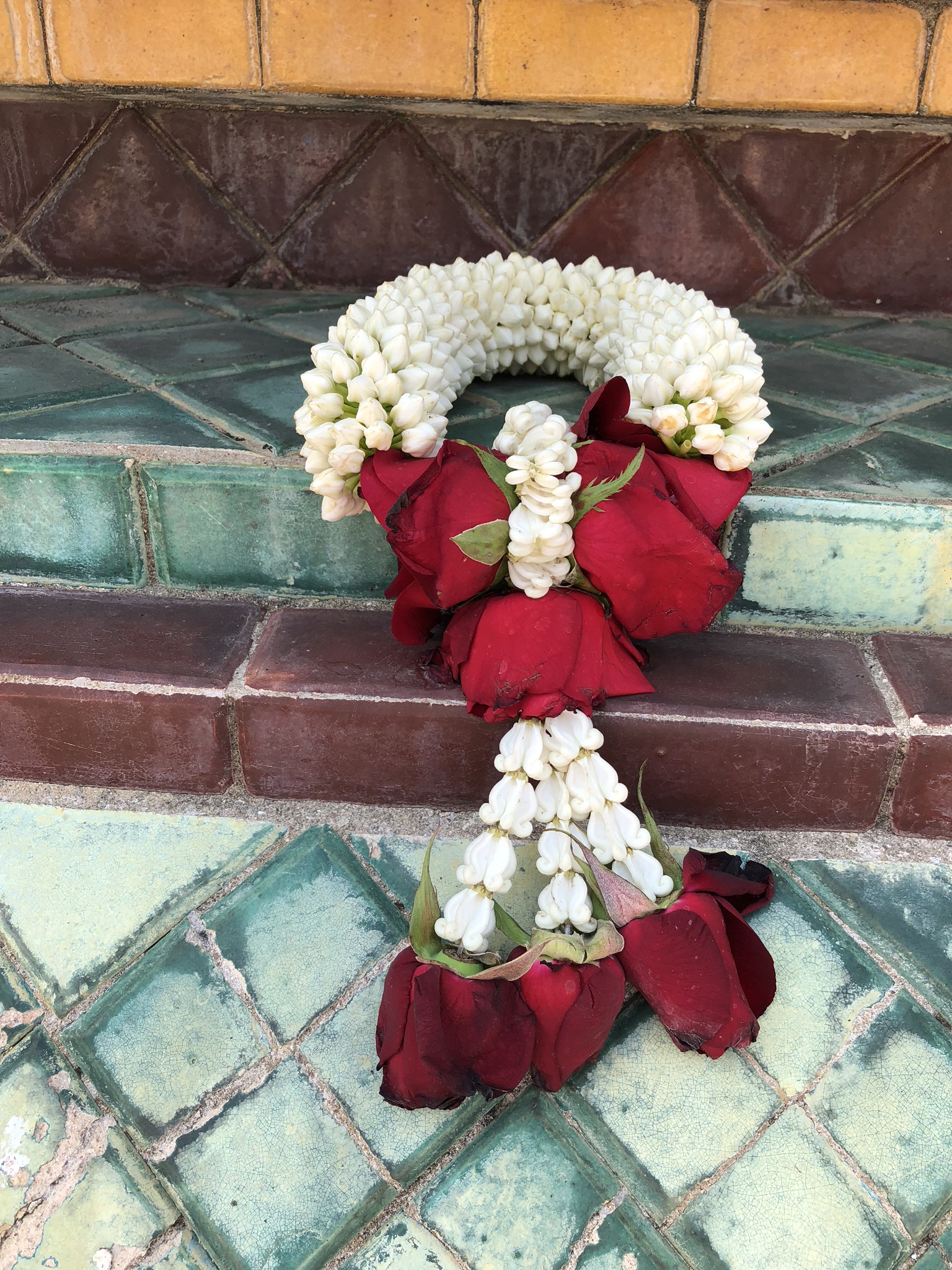 Week 11 of the lockdown, but it might as well be week 9,345. It doesn’t seem like it’s ever going to end. The restrictions are easing a bit where I live, but I’m not hopping on the first plane out to an exotic location. It may be awhile for that. So once again I am daydreaming of a past trip.  The second city of our 10 day South East Asia once in a lifetime trip; Bangkok. 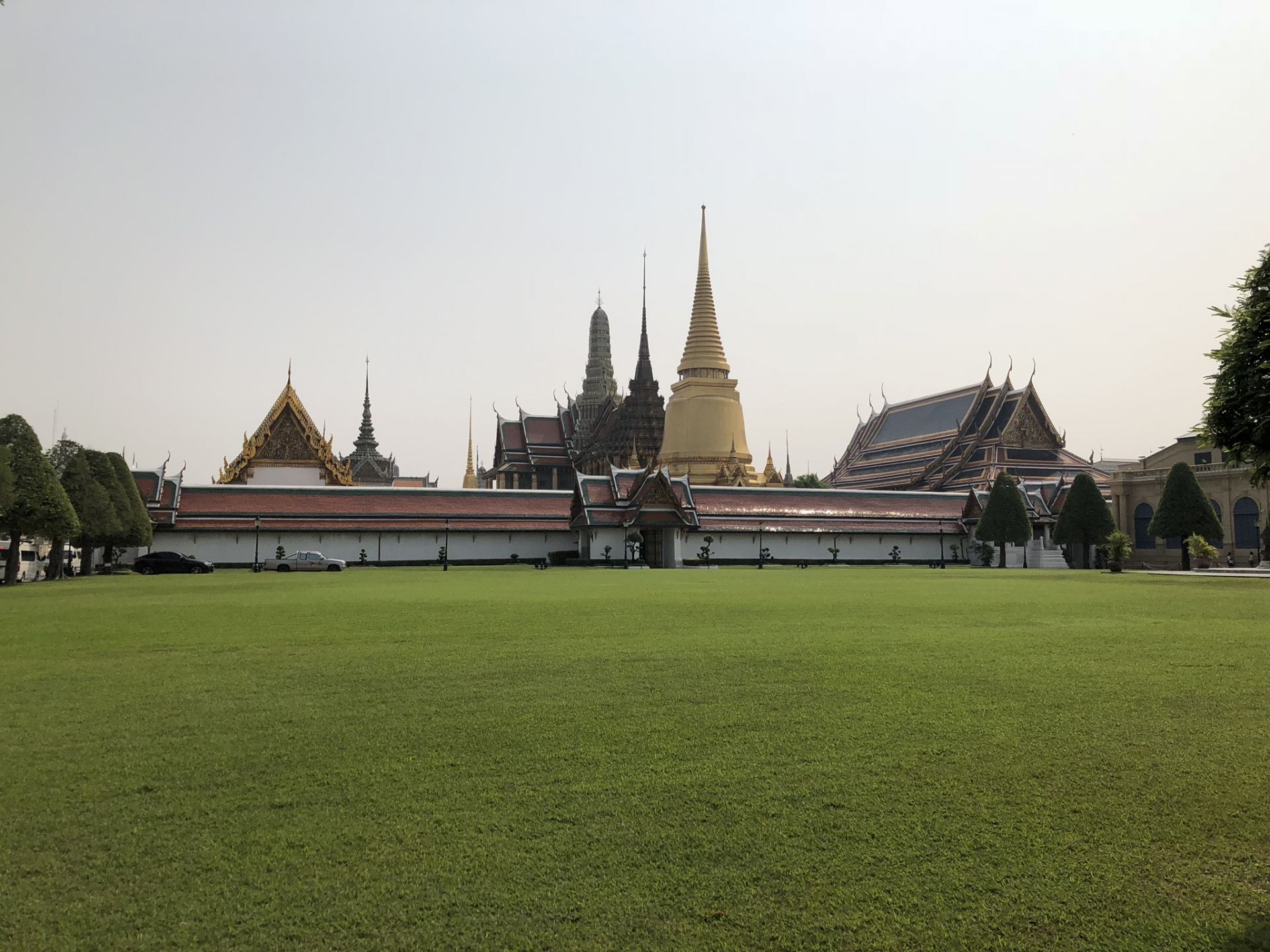 Bangkok. Chaotic and bustling with traffic and people. Tuk Tuks darting in an around in heavy trafffic especially near all the major tourist sites. People everywhere and from everywhere jostling for positions to cross the streets when its safe.

We had made arrangements for a tour guide and hotel but several weeks before our trip That was canceled. As a planner panic set in but with the help of the internet new arrangements were secured. It was  even better than I had hoped. Private guide and a hotel that was beyond exquisite. The hotel was a chance it was inexpensive but it certainly had unexpected WOW factor. Our guide certainly was impressed.

From the moment we were picked up it was non stop, go, go, go. The first stop was the Wat Pho. Our guide bought our tickets, which let us standing there and taking in the view and the huge line for tickets, and away we went. Jockeying for the best views of all the stuctures was difficult. Should to shoulder we stood with the throngs of other tourists also trying to get a good view of the buildings.There was so much to see. The senses were becoming overloaded and this was stop one! The intricately detailed murals, the four chapels that contain almost 400 gilded Buddhas. The courtyard is guarded with Chinese statues. At 46 meters long and enshrined in one building is The Amazing Reclining Buddha, at Wat Pho. there are no words to describe it. So I will leave it at that. 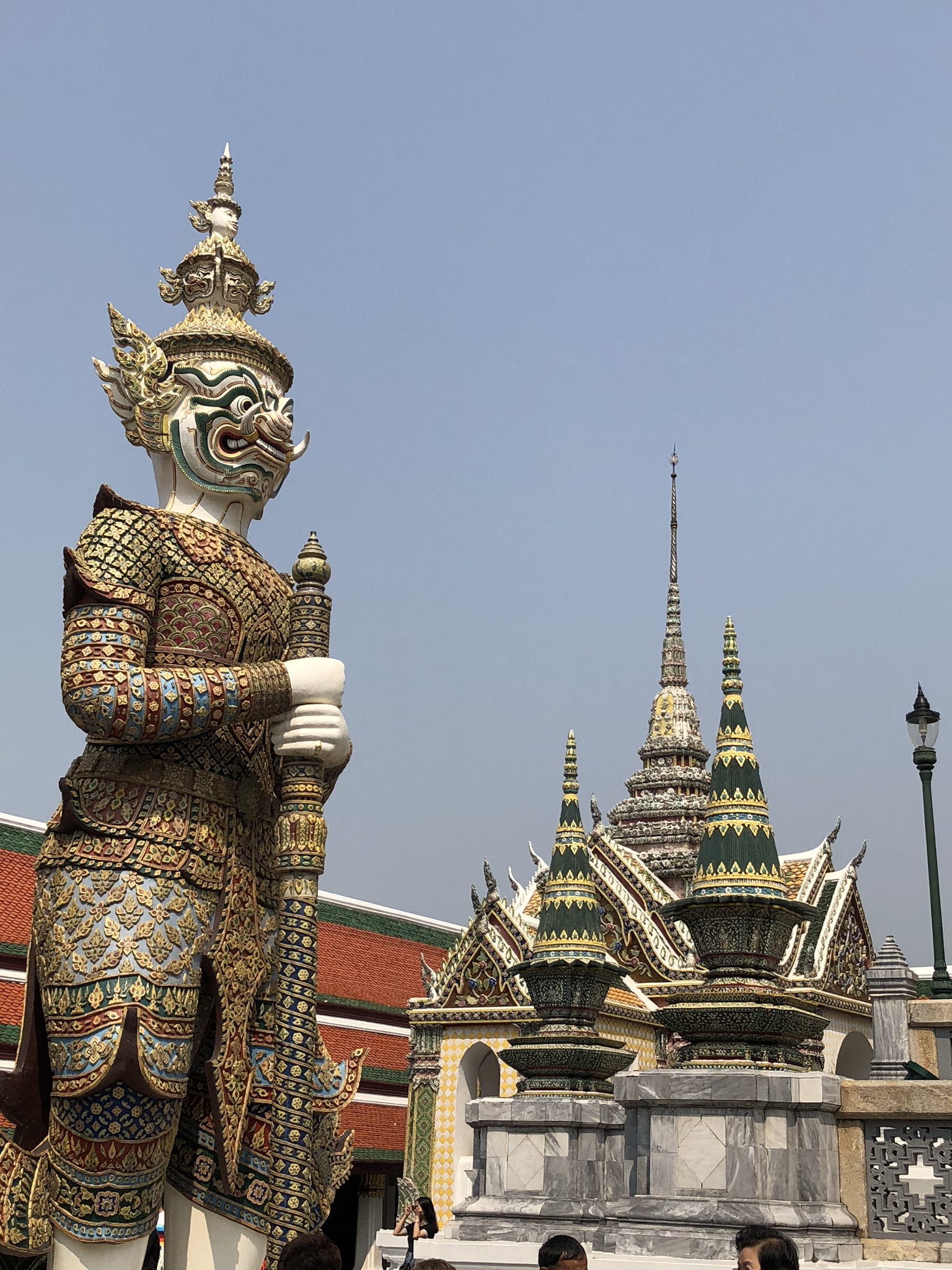 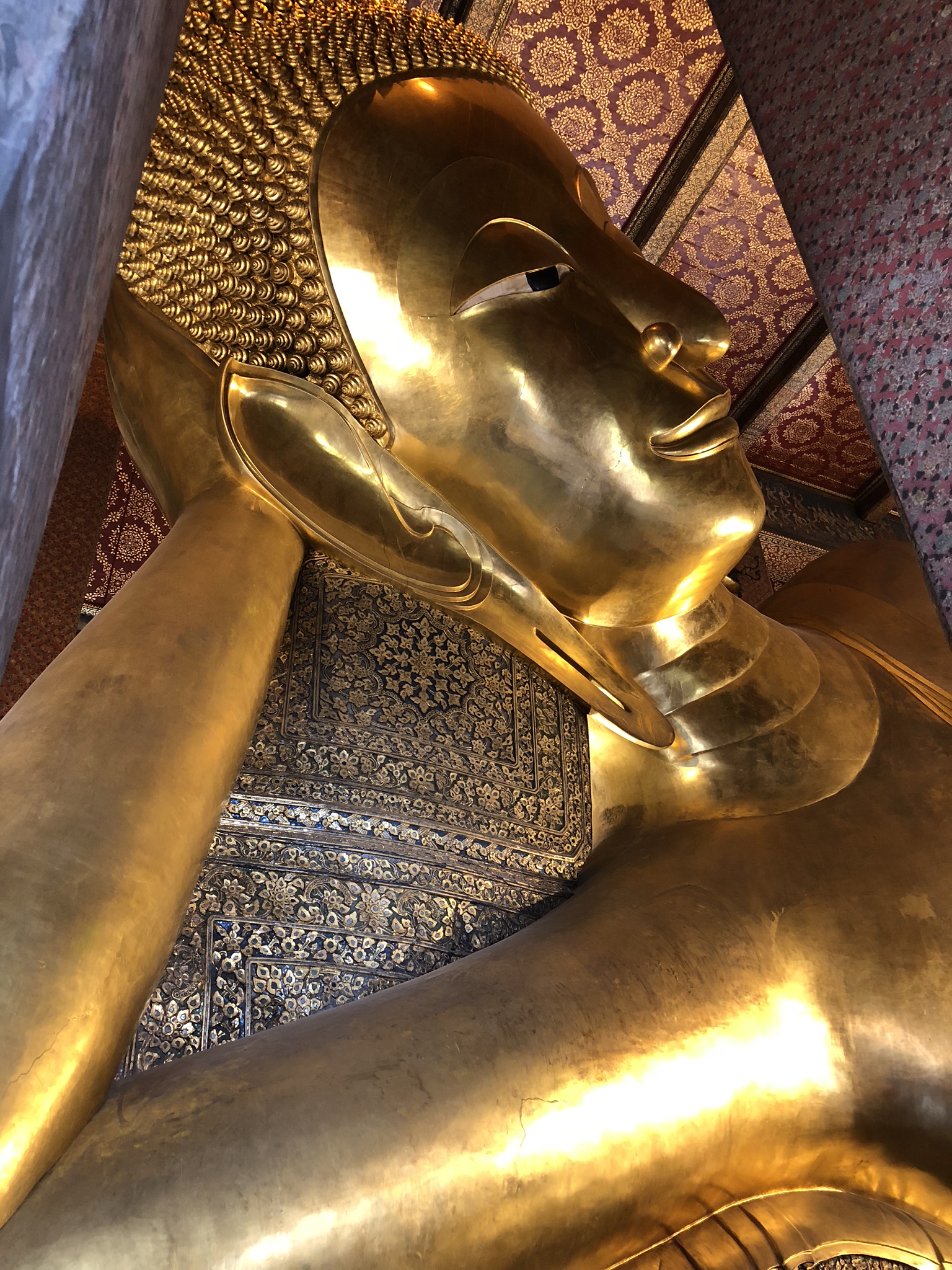 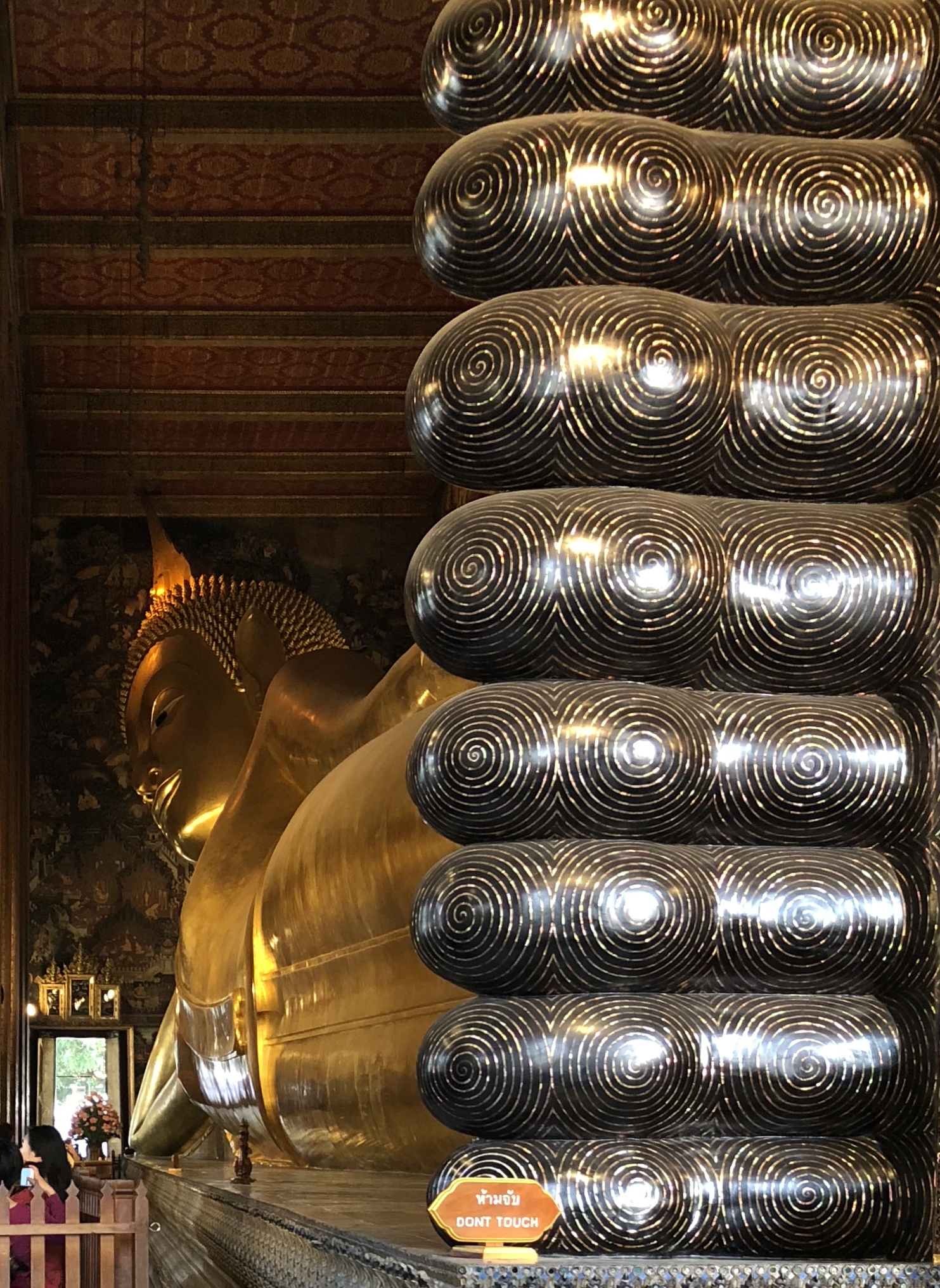 The Grand Place And the Temple of the Emerald Buddha was just as crowded and again our guide got our tickets and we shuffled around the grounds with the rest of the tourists. This Buddha while smaller in stature to the Reclining Buddha, has three different costumes, one for each of the seasons. Summer, rainy and winter. In a ceremony at the beginning of each season the costumes are changed by the king. The Emerald Buddha is guarded by demon statues, there are 6 of them. Each guard is a character from the Rammakian story from the reign of King Rama I.  We were lead to a monk giving blessings that day. We held out our arms And blessed by the monk as prayer bracelet tied was tied wrists to our wrists. I think about three weeks later after it turned dark form wear I  took my bracelet off. 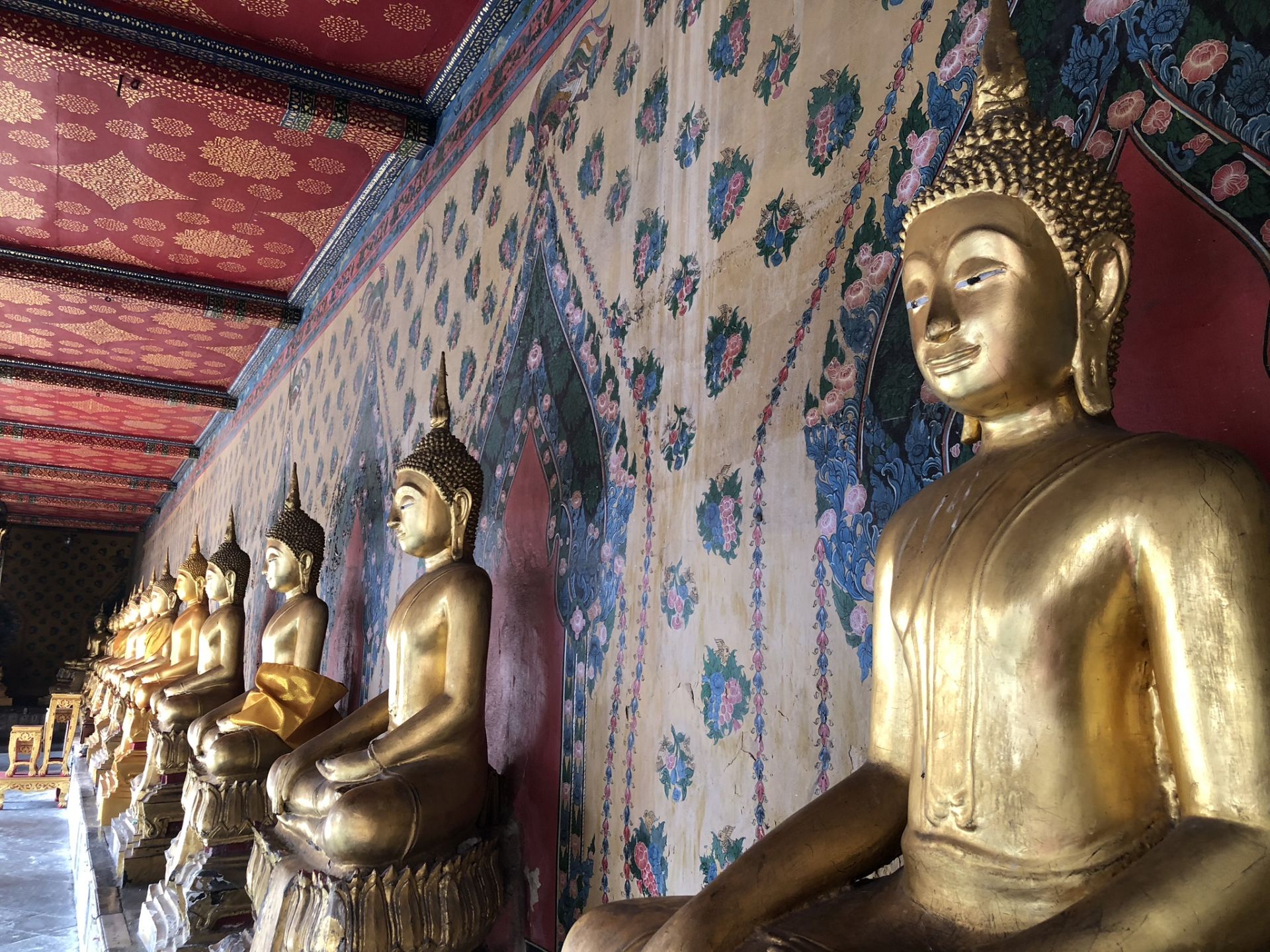 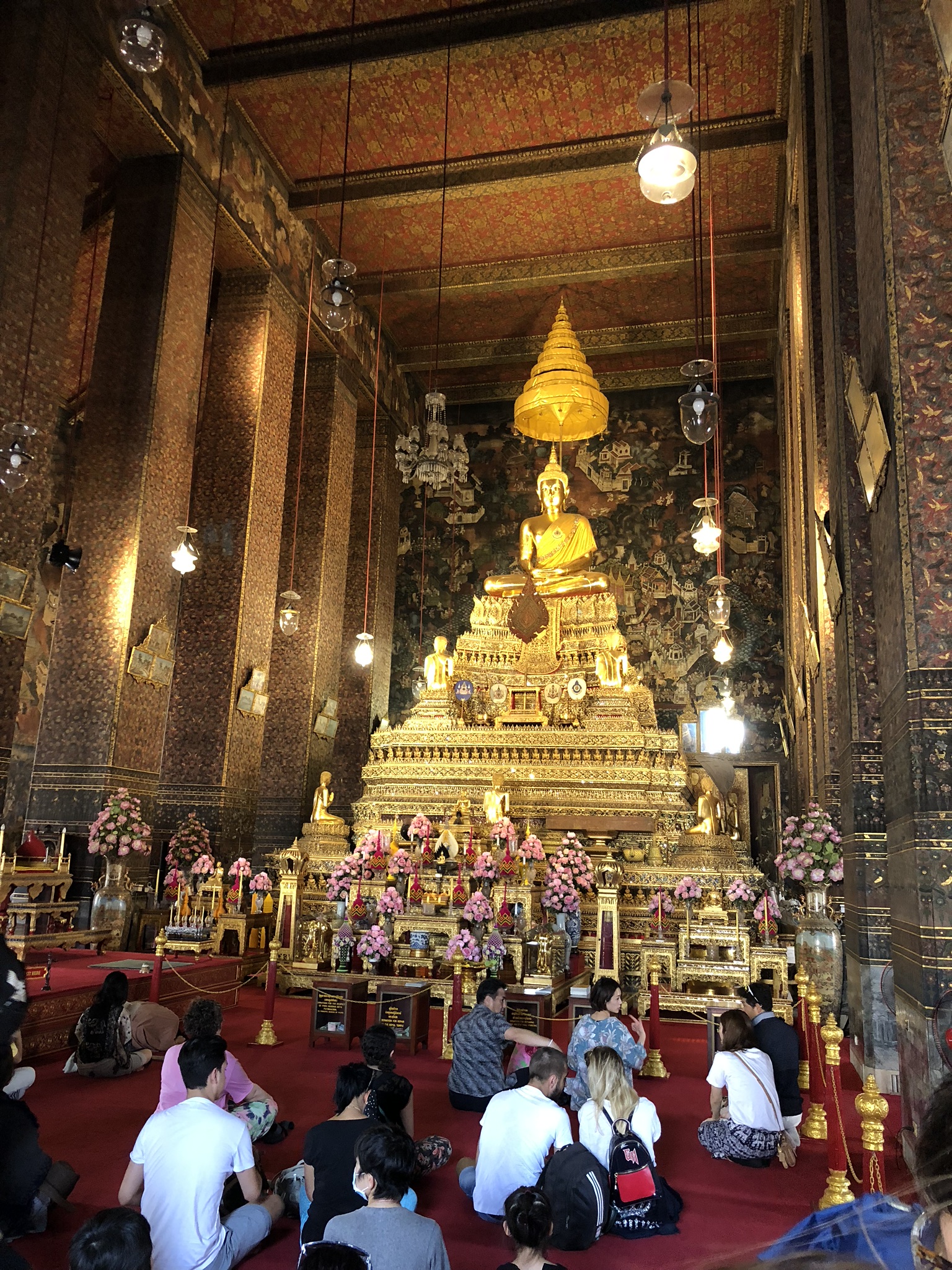 The temples and sites are surrounded by shops selling pants, temple pants as we call them, You must be covered up. They will not let you in if you are inappropriately dressed. Shoulders and knees must be covered. We ended up buying several pairs of pants not because we had to but we wanted to. The Thai BAT to US Dollar made the pants about $8.00, quite a bargain and a great conversation starter off you see the pants in a different country.

Our tour guide walked us down an alley across from the Palace and we nestle in the few tables in the joint. Ok, I love Pad Thai and now I can actually say I’ve had Pad Thai in Thailand. It may be one of those dishes that was created for the tourists, but i don’t care. It hit the a spot. And it was time to rest out of the hot sun for a little bit, and trust me when I say the sun was hot. The day was still early and we has so much to see. 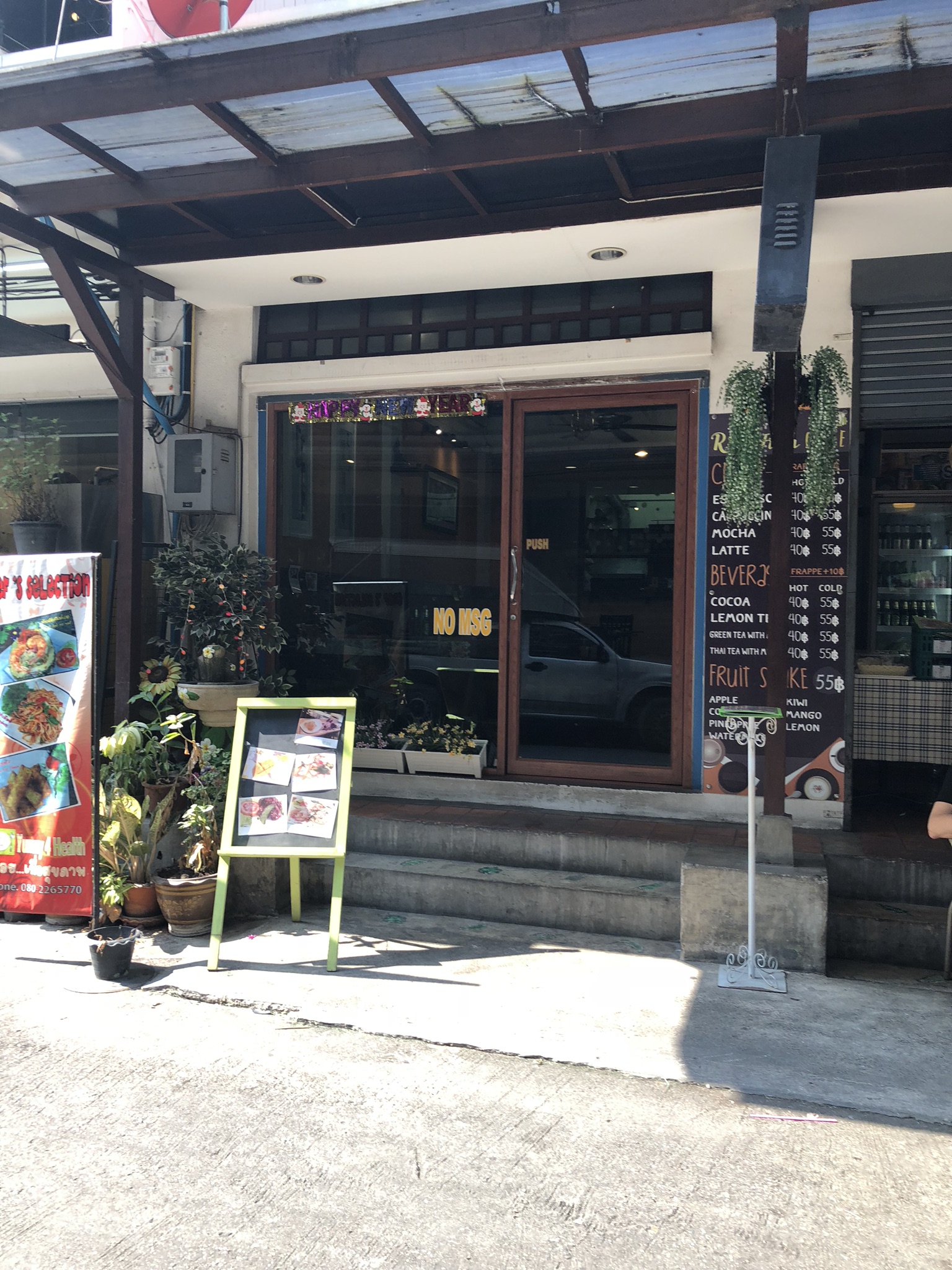 Taking our lives in our hands we grabbed a Tuk Tuk and headed to the river. We boarded our boat for a tour of the city by water.  We motored by homes that were beautiful and others that looked like they were ready to fall into the river. If you are a 007 fan you might recognize the sights from The Man With the Golden Gun. 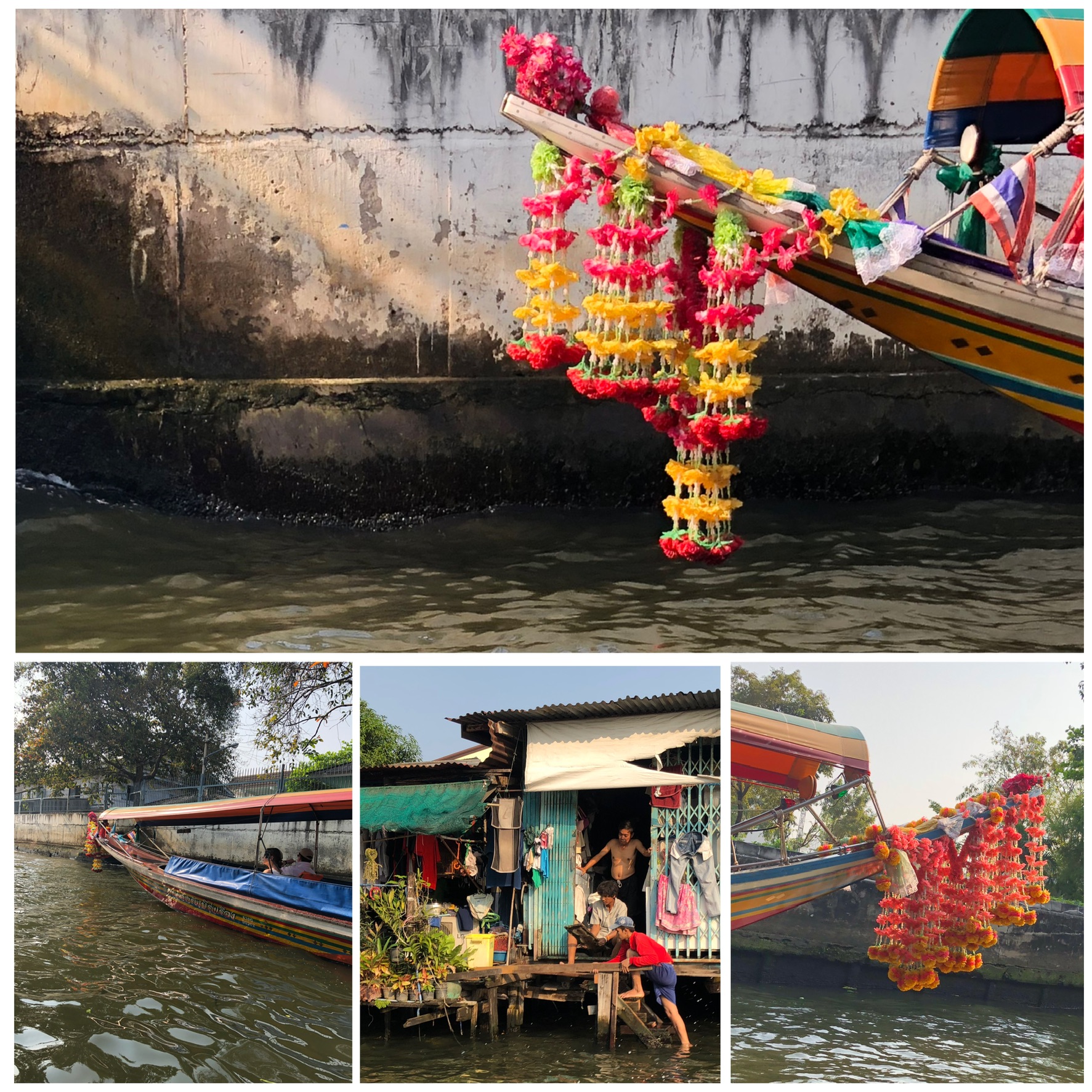 We ended our boat ride at the flower market. The pungent smell of sweet orchids and other followers competing  for  olfactory domination. 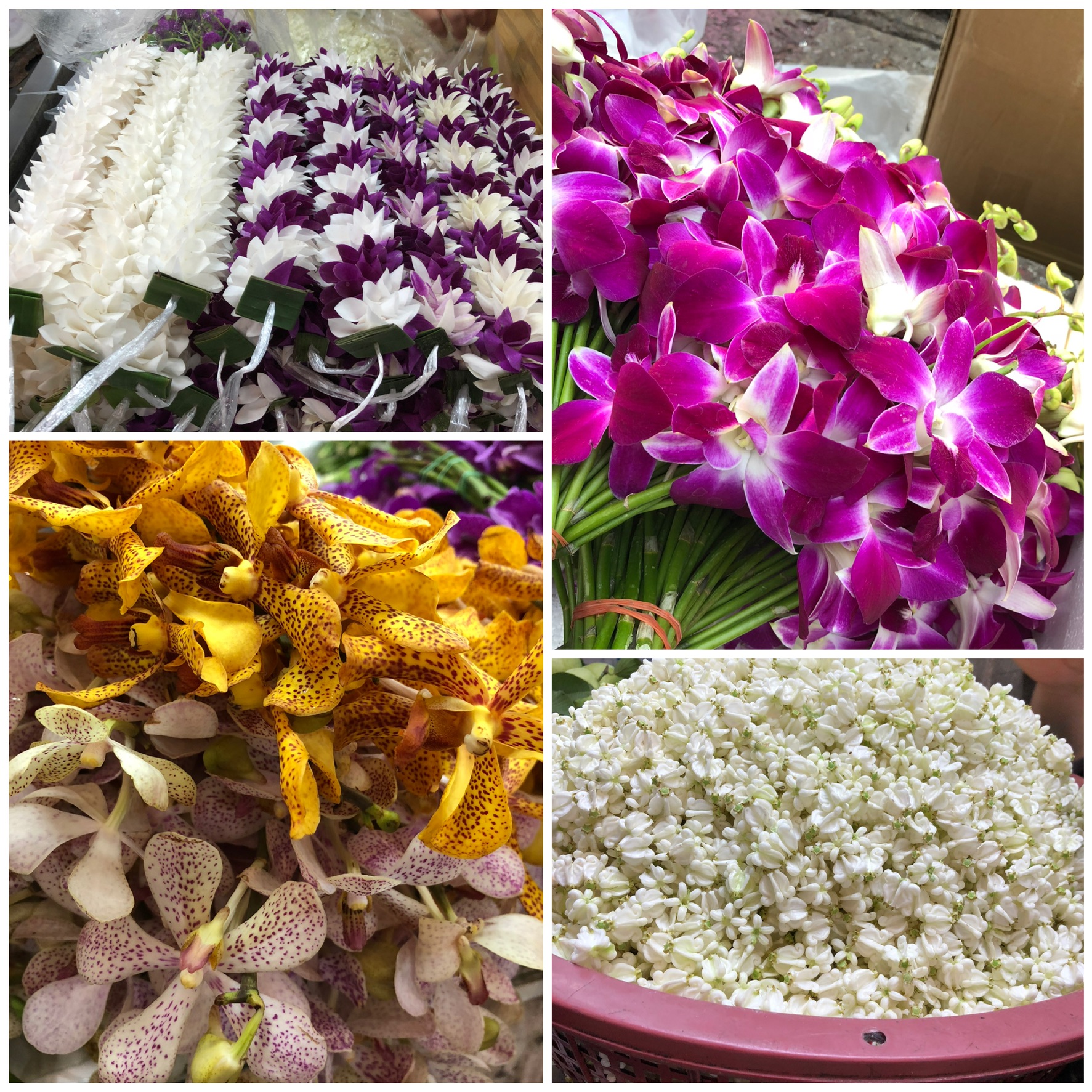 As the afternoon weaned our guide took us to our hotel. This last minute find on the internet. You always hope the description matches reality. As we told our guide what hotel we were staying in he made the comment that it was a very nice hotel. NICE? It was spectacular! The room was huge and the bathroom was walled in glass! With a click of a button the shades whirred up and down for as much privacy as you wanted. 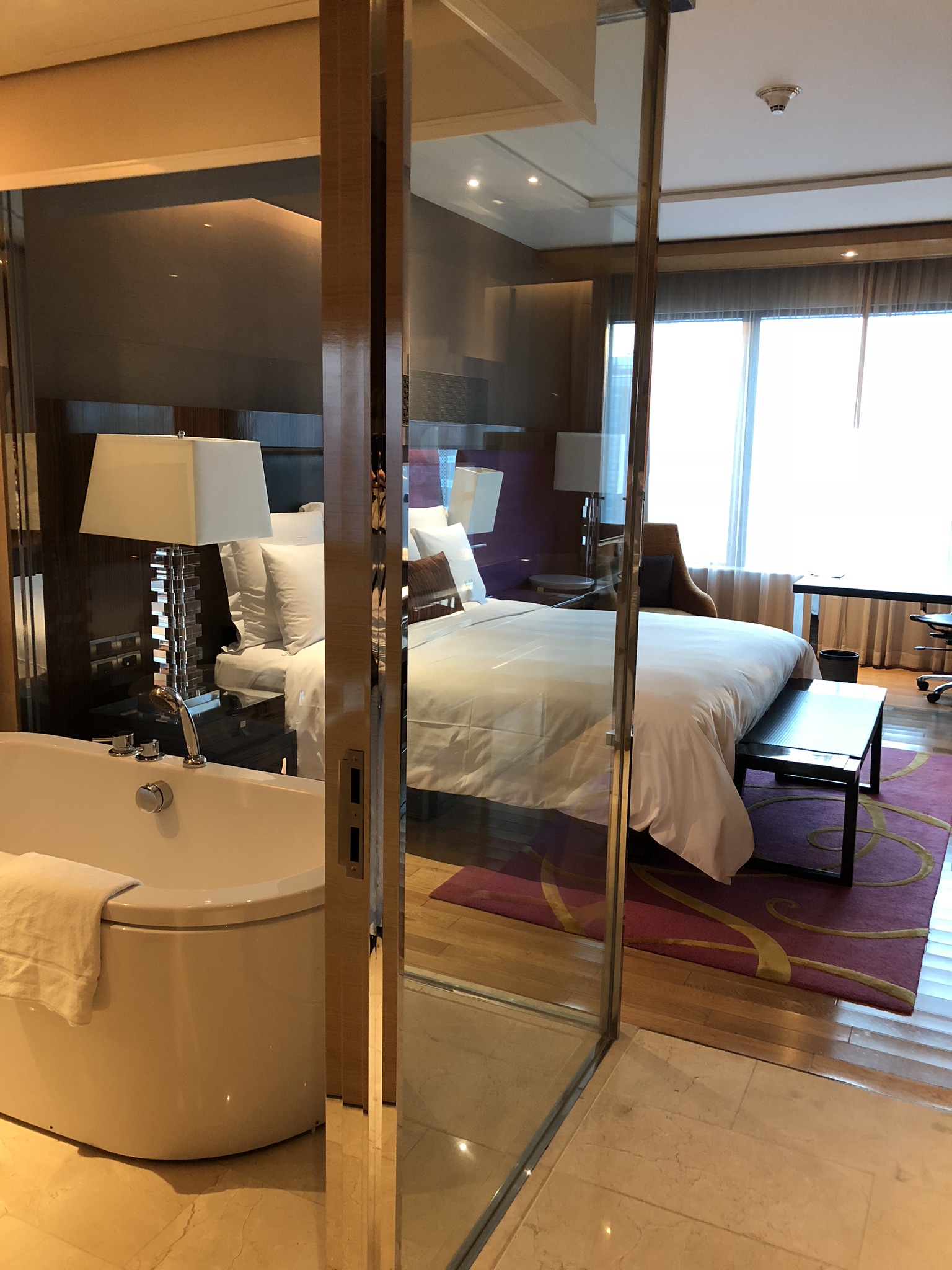 After a quick shower and a rest, we were off again. This time to the famous Chinese night market. But on this trip it was not to be. It was closed due to the Chinese New Year. We were out of luck. Peter, our guide, did find us a few stalls that were open and since he knew the owners, I knew it couldn’t be bad. Satay, fried, winter garlic and other assorted foods. It was delicious. Street food may put off some people but this is why I  love to travel. Try new things, experiment. 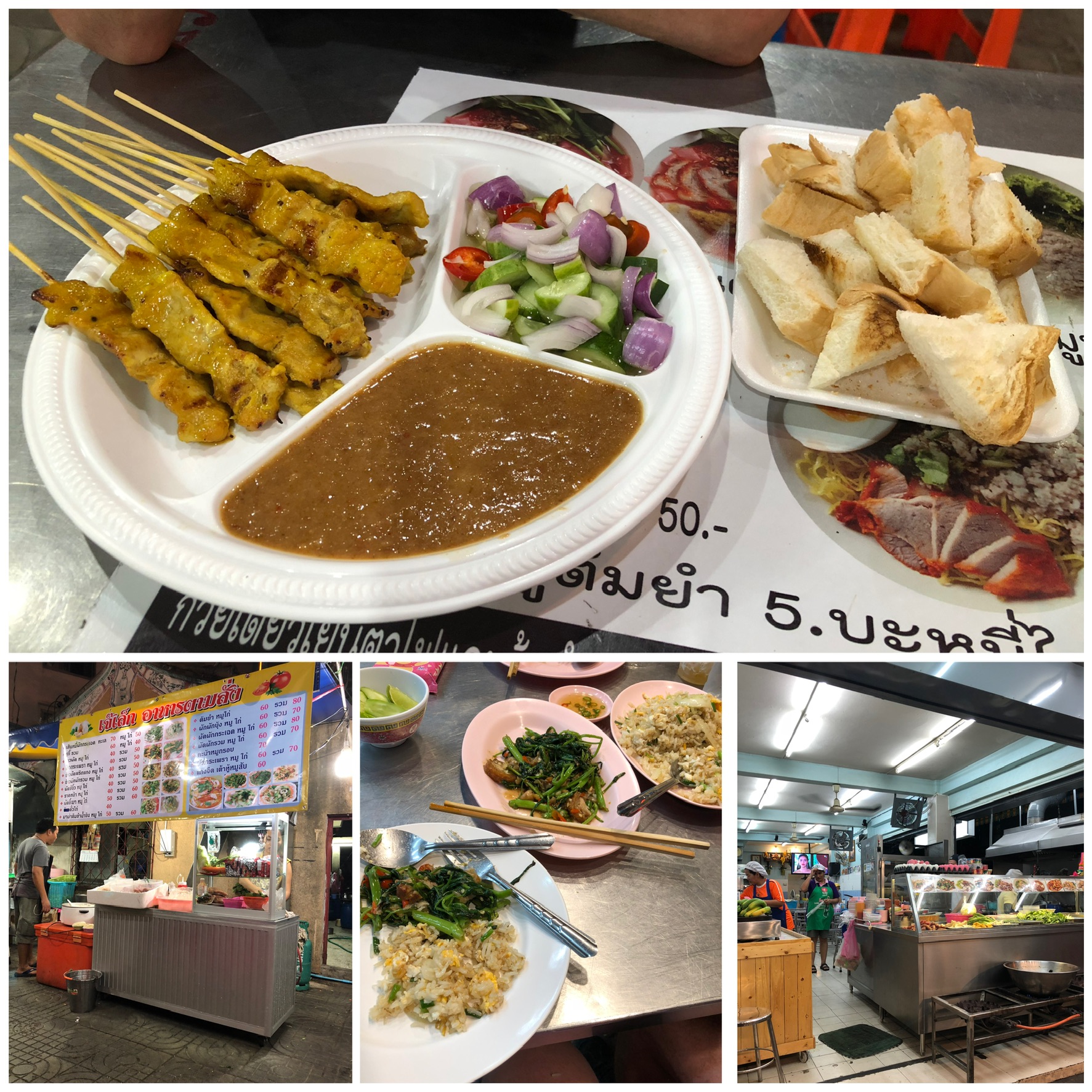 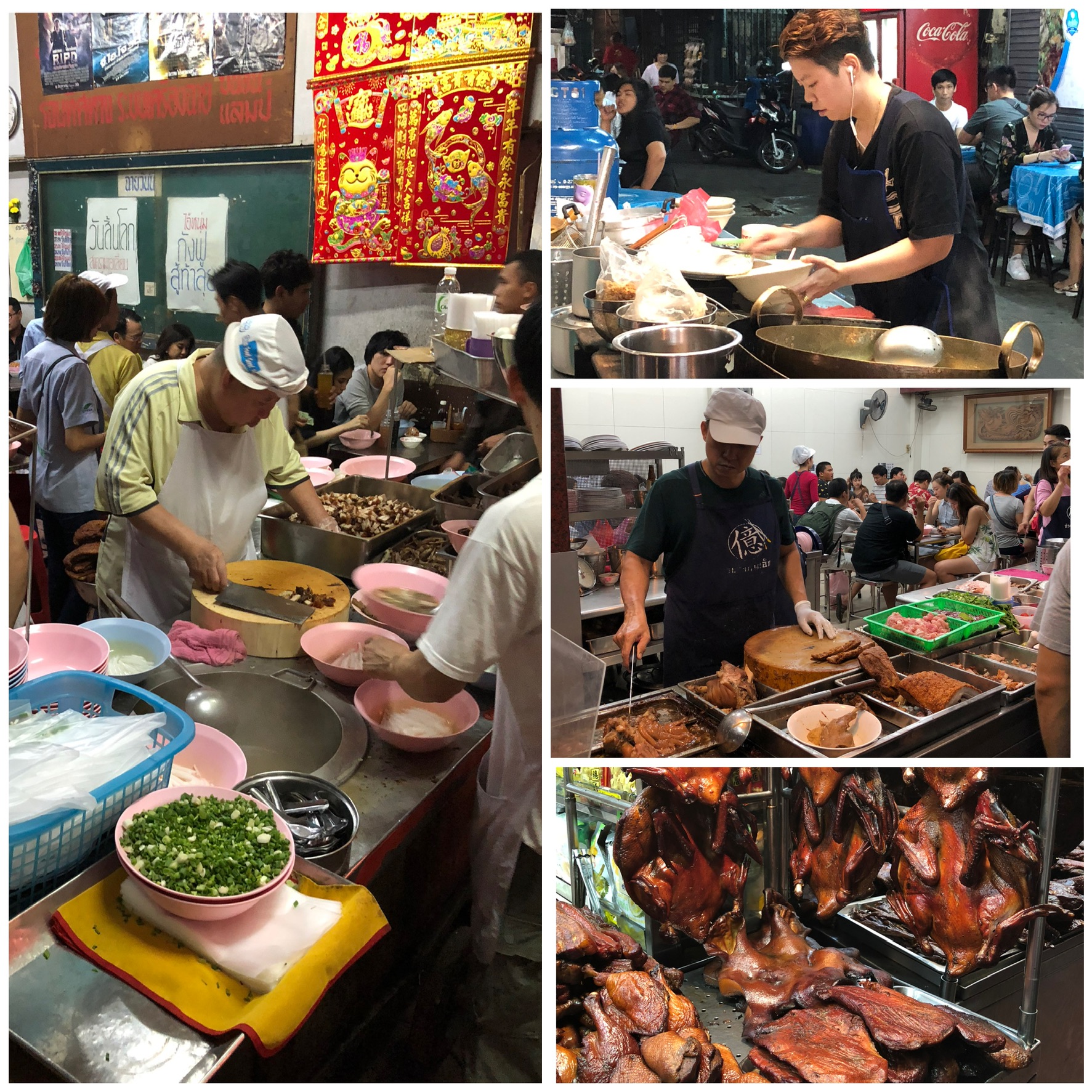 After our meal and feeling recharged we headed off to what is probably one of  most touristy spots in the city,  Backpacker street. It was loud crowed and hawkers standing guard trying to lure you into to their bar with buckets of beer. The music and people spilled out into the street, all looking for something. I suppose we all do the one really cheesy, cliché activity  on a trip. We came across a vendor with fried insects. Crickets, silkworms and larger scarier tarantulas and scorpions. What would you try? Pretty touristy, pretty cheap and you were not allowed to take pictures. I did sneak a picture and  we chose crickets and silkworms. No way on the spiders. Crickets not bad,  very crunchy but the silkworms, were another story. They were very crunchy and was made things worse,  they fell  apart and got stuck in the back of the throat. Now, I could have used a beer to wash it down. 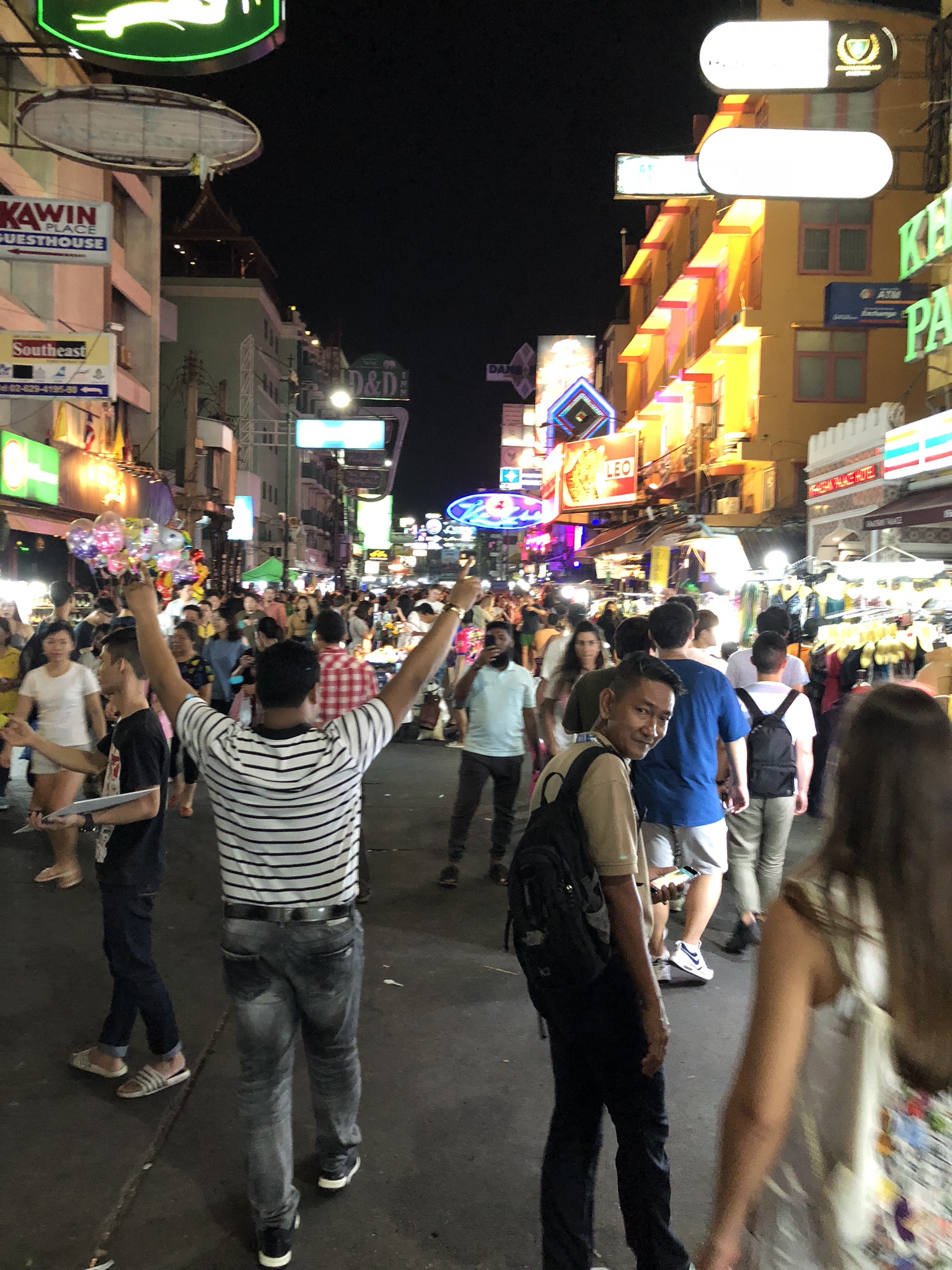 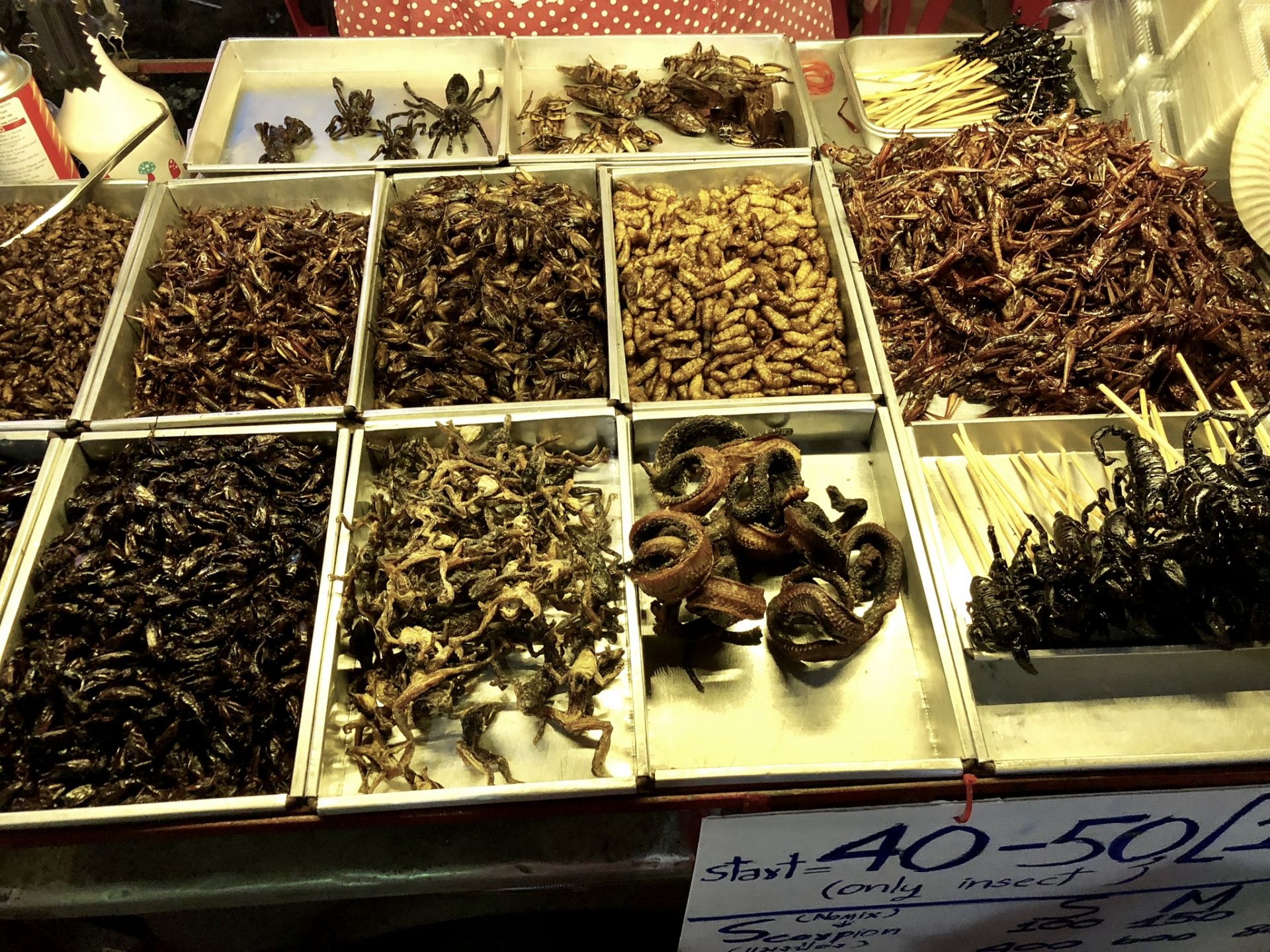 We finished our stroll and our guide grabbed a Tuk Tuk for a night ride to the city. We stopped at the Grand Palace once more. This visit was much more relaxed as there were  just a handful of visitors. A relaxing stroll.  You can’t go into any of the buildings but it was so beautiful at night and most importantly, nearly empty. 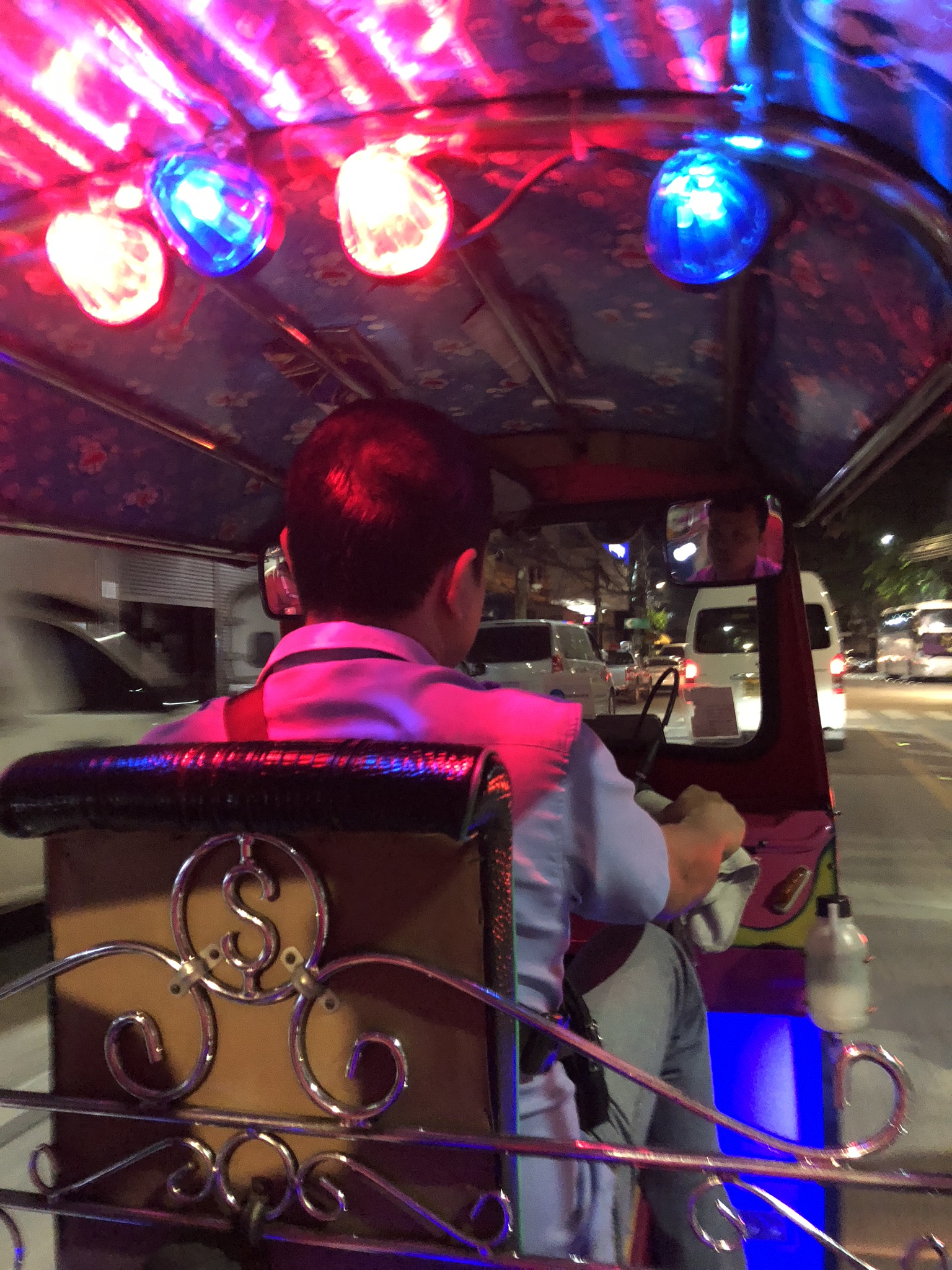 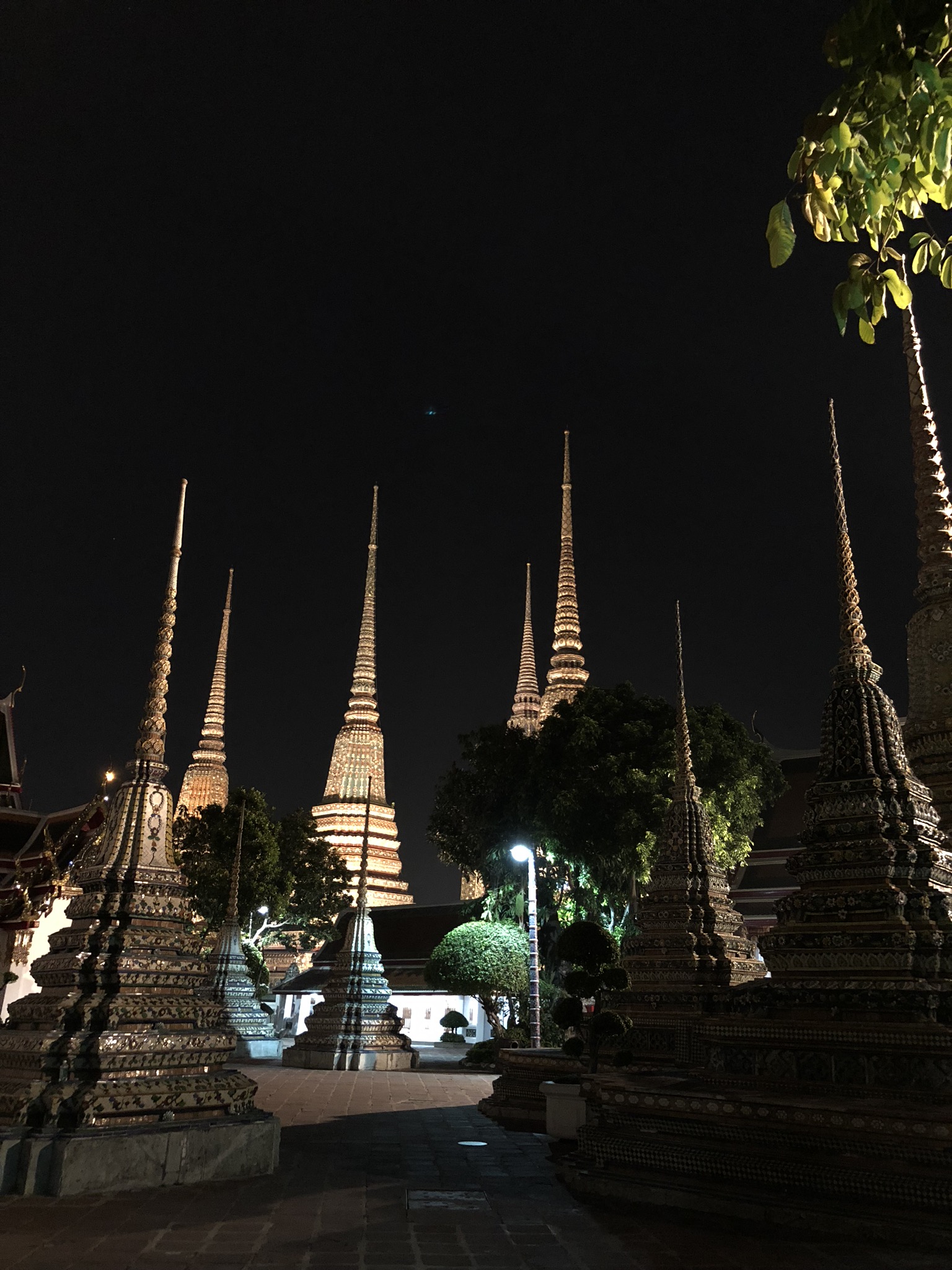 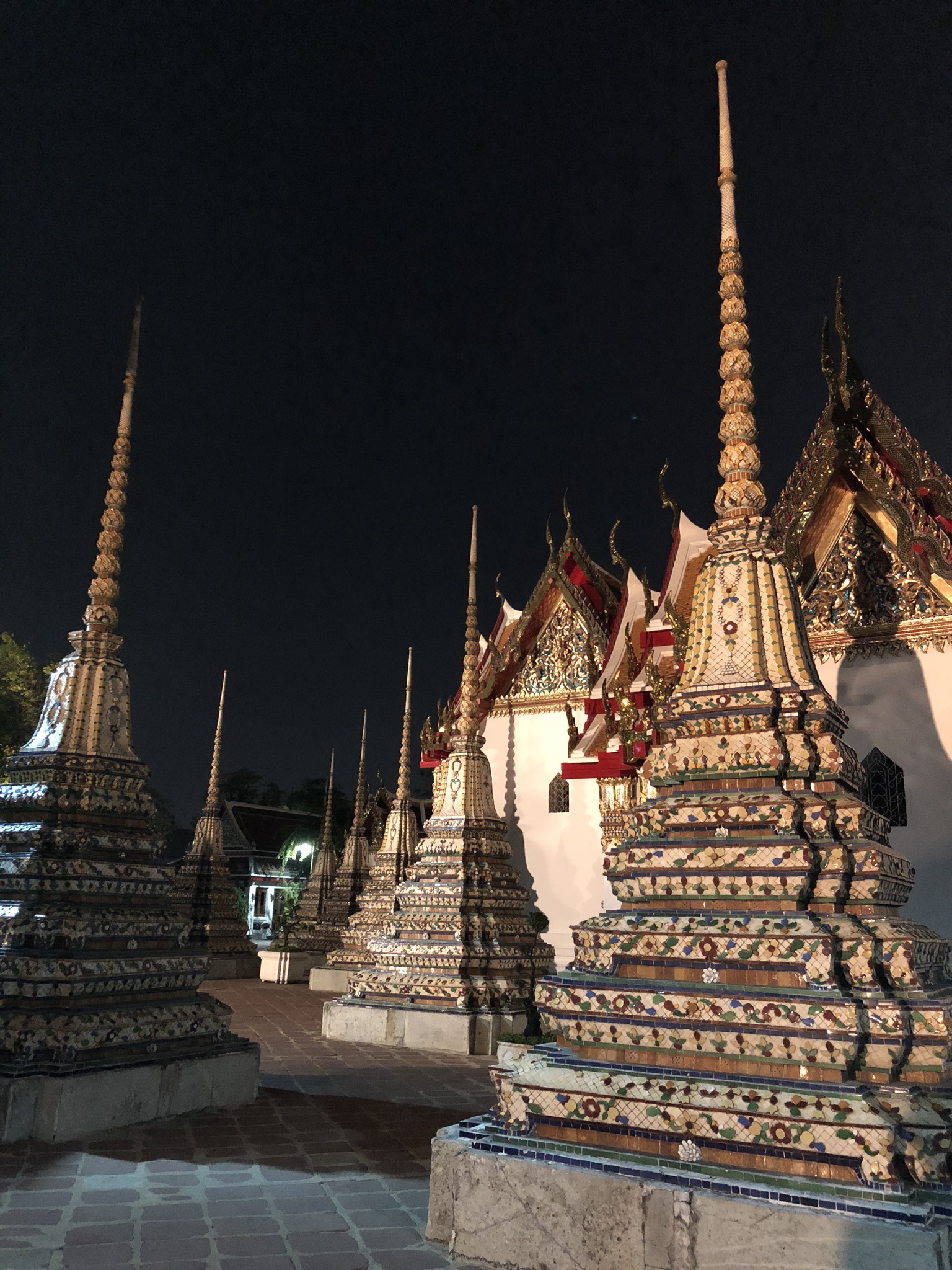 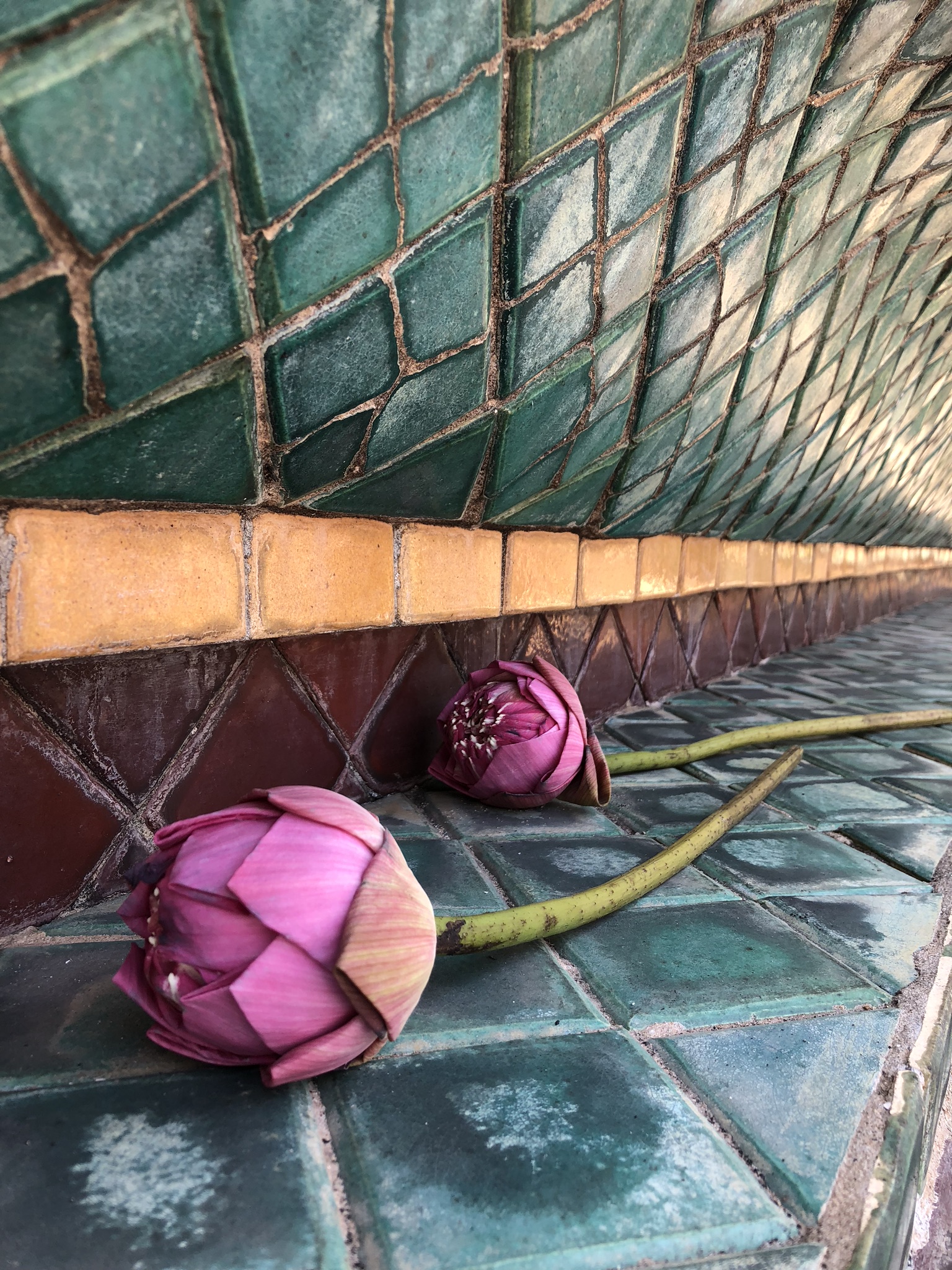