I love food and I love history. These two have come together
to form the History of Royal Food and Feasting, presented by the University of
Reading in the U.K.

It is a five week online course immersing you in the food and
history of the English Court from Henry VIII to Queen Victoria.  There are videos, quizzes, study groups and
most importantly the recipes. This week lesson focused on the Court of Henry VIII
and the feast centered on the Christening of the long awaited proper heir to
the throne, Edward I. Henry VIII didn’t even attend, after all the divorcing, creating a new church and head chopping I would thought he would attended!

In this first lesson you learn food in the time of Henry VIII and feeding the masses at
the court. Ther are some interesting bits of history, Did you know Henry was the only one eating with a fork? He was not the messy, throw the turkey leg over your shoulder eater. And yes they did have
table manners. In fact there was a very lengthy edict written for table manners
of the court.

Once you sit place your hands neatly on the table; not on your trencher, and not around your belly.

Don’t wipe your fingers on your clothes; use the napkin or the ‘board cloth’

Napkins were laid across the left shoulder instead of being placed on the lap and no elbows or fists were allowed on the table. No elbows on the table!  Can’t
you just hear your mother telling you that?

The  feasts that were
brought into the great hall to feed the court twice a day were called “messes” and these messes would serve four at the table. The court consisted
of about 600 people. Can you imagine feeding 600 people twice a day? I don’t think
I will complain about trying to get dinner on the table for 3 anymore!

The recipe of the week I am choosing Tart owt of Lente. You
can download the PDF here 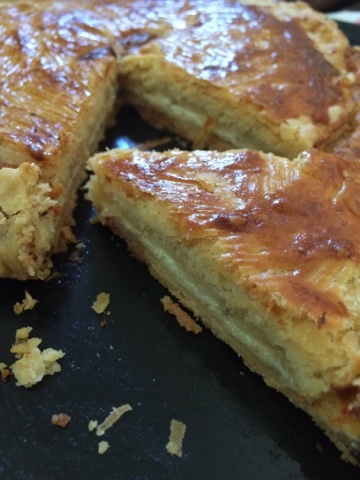 It is a cheese pie. Found some old English Cheddar and used a little bit of ricotta cheese as well.  I also used heavy cream. The recipe calls for a shortcrust or other pastry crust. I found this British recipe here  .  I used all butter and it really turned out flaky and buttery. So, in my makeshift kitchen I was able to re-create
the tart!