When I say saffron you say expensive. These little red threads come in the smallest of packages for the largest amount of money. And when I say the Middle East do you think rugs, gold, and  other goodies? Because that’s what I thought when the hubster was deployed to the Middle East. Those items are on my wish list just like most travelers to this part of the world. When asked what I wanted, I wanted saffron (OK, I really do want a rug or two and some gold).  Having been conditioned to the small amounts of what we buy in the western world I was in shock and awe at what came out of this of the priority envelope from the hubster.  Wrapped in the comics that I had sent weeks before were two plastic containers of the red threads that are as precious as gold. My eyes bugged out–like a cartoon character!  So now what?  I divided up the one container in small parcels (think drug dealers)  and took it work to share with co-workers. One colleague suggested I sell it and then I could retire. With one container left I was stymied, so I did what one really tech savvy person would do and put it on social media asking my friends for recipes. I received many so now I have a project to work on. I decided to start out with easy ones like saffron risotto and work up to paella and Moroccan dishes as well as well as dishes from Turkey and Saudi Arabia. 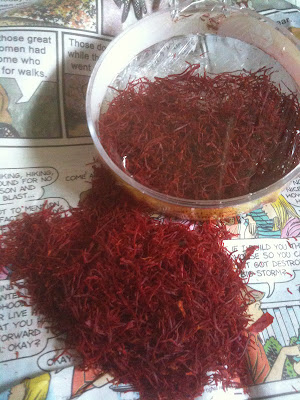 I have several more containers coming in the mail. Just how much saffron can one person accumulate  in one year? We’ll see. If I am retired in a year you’ll know how much saffron I received!